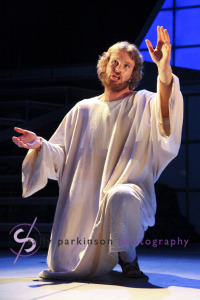 Gimme that old time rock’n’roll religion. No half measures with Colchester Operatic’s full-steam belt into the musical that started the composer and lyricist on their road to fame and fortune back in 1971. It’s a good production, beautifully sung on a big, simple dramatic set.

There’s much to admire in a show that, in spite of its loud pop pretentions, has a lot of songs that are not easy to sing in semi-operatic orchestrations. This is particularly true of numbers by Jesus, Judas and Pilate.

The society has a real find in Tom Stapleton in the title role. He has a voice of stunning range and his delivery of Gethsemane in which he tells God how frightened he is of his coming ordeal is very moving. And he is matched by Shane King’s clear-toned tenor as Judas who betrays Jesus, he says, because he has allowed things to get out of hand, out of control.

A rich, dark baritone, John Davies is a stand-out ‘wash-my-hands’ Pilate and Leanne Fincham does well by Mary with her big song, I Don’t Know How to Love Him .But all the singing is good, especially the very important chorus work which covers several different groups and comes in right on cue and with every word distinct.

One doubts if the relationship between Mary and Jesus was quite as touchy-feely as this musical makes it, but it’s a show that builds brilliantly to its inevitable crucifixion conclusion which gives the piece a very unusual quiet, poignant ending.

The first night decibels from the very good band were occasionally a bit over the top, causing some slight distortion of sound and the people operating the spotlights were not always on target, but this is a show that will settle nicely and well worth a visit.

Directed and Choreographed by Dani Fincham

I had been looking forward to this production with great anticipation and my expectations were matched totally in a superb production.

From the opening Overture which set the mood for the performance leading into the opening number the standard was maintained until the final moving Crucifixion scene.

Both Dani & Neil must have worked tirelessly to achieve this, and with a talented cast working as a whole the audience was swept along in the events during the last seven days of Jesus life.

Jesus played so well by Tom Stapleton was both strong yet vulnerable and his terrific voice completed his portrayal of the centre and core of the show.

Tom’s interpretation was so moving and so deep it was truly amazing.

Judas played by Shane King got really behind the character of a man who was once a follower and disciple of Jesus, but conflict led him to betray Jesus. With a stunning range of voice Shane gave us a strong man brought to a broken one by his drastic actions.This was one of the most demanding parts both vocally and dramatically I have seen Shane play and was excellent.

Leanne Fincham playing Mary Magdalen in a gentle sympathetic style was just right and very moving, and “I Don’t Know How to Love Him”beautifully sung.

John Davies as Pilate looked absolutely the part and as always John’s voice was exceptionally good. The interaction with Jesus was well placed and effective.

Rikki Hammond as Caiaphas and Ben Adams as Annas gave contrasting styles to their characters which was confident and convincing.

Caiaphas quietly menacing with his super deep, deep voice and Annas really direct and strong in his demands to Judas.

Nathan Crane as Peter and David Rutter as Simon completed the disciples and added great voices and sound.

The last main character with his performance of the very extrovert Herod, played by Jonathan Davis, sold this part as light relief with great style and with “Herods Girls” all tapping away was a joy to watch.

Every show needs a supportive chorus and as such I would commend Neil’s terrific work with the singing from everyone both on and off stage. The sound was both joyous but equally poignant almost ethereal at times, and the balance of voices in harmonies spot on.

A mainly basic set was used throughout but was so effective due to the lighting effects together with excellent costumes.

The flogging of Jesus was very real and very painful to watch and the ultimate spectacular Crucifixion Scene I believe brought many of the audience to tears so powerful was the effect of the scene. I felt it so moving and got so involved in the production it did not feel right to applaud at that point .I am sure many people felt this connection as well judging by the reaction around me.

As ( in the words from the show) it ”exceeded expectations. Thank you so much  Dani for a memorable production worthy of all the praise in this report.

And thank you also Neil, a terrific achievement musically working with great voices and a very supportive band creating some exciting sounds.

Many thanks as always to the Committee for the hospitality which is much appreciated. 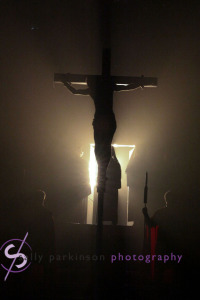 “I came out with tears pouring down my cheeks.“

“Better than the first time I saw it.“

“Every note was so familiar… heart rending.“

“I would so hate to have missed it.“

“I have see this several times but never before have I been so moved, especially during the flogging and crucifixion scene. Thank you for a truly enriching experience.”

“I went with a friend on Monday evening – what a brilliant show in every way – singing, acting, dancing, scenery, music etc, etc.  I have been to most of your productions over the last 40+ years and I think this is one of the best. Many thanks to you all”