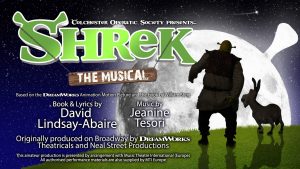 Thank you to everyone who took the time to audition today (Sunday 17th July) or send in a video audition and for everyone’s patience with some delays.

We are still to cast some parts, as we need to see the children’s auditions and do some extra auditions for Lord Farquaard and Donkey (from those who were at auditions today who have been contacted) next week (Sunday 24th July) before making the final casting decision on these parts.

The standard of auditions was very high, making this a very difficult decision for our audition panel, but as we did state in all the material sent out, we could not guarantee all those that audition would get cast, especially due to high numbers of people auditioning.
If you were not cast or did not get the part you wanted, please do not be too disheartened and you should still be very proud of yourself for facing any nerves and going for it regardless.

All other named parts/cameos will be cast in due course.