The final curtain has closed on CO2’s run of Legally Blonde at the Mercury Theatre and we are very proud of everyone involved, both on and off stage, in making this production the success it was.  Audiences thoroughly enjoyed the show.  The cast gave so much energy and were supported with a great backstage team.

Some of the great comments we received about the show….

“I traveled In wind and rain from Rochester in Kent to see your “Legally Blonde” It was worth every minute. Your young cast were superb in all the elements that make up a musical. It was one of the best armature musicals I have ever seen. Good luck with the rest of the run, which I don’t think you need. You have the perfect musical on your hands.”
Gordon Harris and Terry Dumbrell.
(Gordon Harris is the South East NODA Rep and they will be doing the show in 2016.)

“Hi – Came to See Legally Blonde last night – BRILLIANT! I’ve been involved in Amateur Theatre for over 30 years, & have seen lots of ‘average’ performances – yours was absolutely brilliant, the whole cast & crew should be proud. As well as the key characters, it was noticeable how good everyone was – the detail, for example, at the start in a restaurant scene, waiters pouring wine, people ordering from the menus, also noticeable as people exited the stage they remained in character all the time.
Well done – I’ve had a lot of pleasure from Amateur theatre, its so good to see so much young talent in the local area!” – Graham

“Huge congratulations to the cast, crew and creatives for Legally Blonde! Such energy, commitment and fun from a young cast who were all, without exception brilliant!!! Well done all of you! Definitely an award winner and definitely one of the best CO2 shows EVER!!! Enjoy your after show party guys, you were all amazing!” – Sally Fisher “Saw the show last night guys and I was sooo impressed with how slick and full of energy it was, lots of other people in the bar saying the same thing

You guys look like you’re just having the best time, keep the energy up for your last few nights, you’re all doing such a great job, well done! xx” – Laura Tuck “Absolutely enjoyed Legally Blonde last night. How talented you all are I thought the Irish dance take off was hilarious and so well done. I love Irish dancing and thought they did it so well. Well done to you all x” -Barbara Lickerish 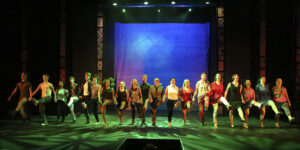