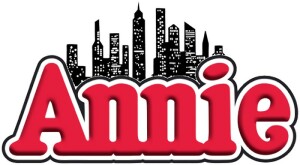 We are looking for two teams of 7 children (Annie plus 6 Orphans) to join us.

If this is of interest to your child we would ask you supply a video recording of them as per the instructions below:

In an American accent, please say the following:

Email the recording to: cos1theatre@hotmail.com, upon completion

DEADLINE for accepting video submissions is Midnight on 11th September 2018.

If your child is successful in this first step you will be invited to attend a pre-audition session on Tuesday 25th September at Prettygate Junior School, Plume Avenue Colchester, Essex, CO3 4PH. at 7.30pm – 10pm. There will be an opportunity to practice singing, learn a dance routine and work on some dialogue.

There will be a £60.00 show fee for all of those offered a role. The show fee needs to be paid on the first rehearsal – Monday October 1st.

Emails will be sent out advising whether your child has been successful or not.

A detailed rehearsal schedule will be sent to successful candidates along with a letter of acceptance and medical form.

Rehearsals are on a Monday evenings at the Officer’s Club and Thursday evenings at St. Therea’s (7.30pm-10pm) with some Sunday daytimes. You will not be ‘called’ for every rehearsal.

We ask for a high level of commitment with particular importance after the New Year, when rehearsals will be every Monday, Thursday and Sunday until the show opens.

Colchester Operatic Society (COS) works closely with Essex County Council to ensure compliance with the various Child Protection Legislation. COS have a “Child Protection Policy” available to view on their website. A copy will also be available at all rehearsals and performances.

Registered chaperones will be responsible for the care of members until they are returned to parents or parent-nominated adult.  We will endeavour to finish rehearsals and performances at the notified times and would respectfully request that parents collect their child promptly at that time.

A chaperone will stay with members until they are collected.  They will not be allowed to leave unsupervised.

We look forward to hearing from you and good luck!

Want to see the Wizard? The wonderful Wizard of Oz?

Our talented cast have been busy rehearsing and this promises to be a fun and entertaining show for all ages!

To book tickets follow the yellow brick road to the Mercury Theatre website or call their box office on (01206) 573948. 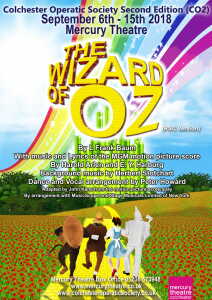 Some of our lovely ladies from the Hairspray cast had the opportunity to get some Hair and Make up styling tips from Chocodolly in preparation for our upcoming production of Hairspray.  Chocodolly is a local vintage store that opened their doors for us after hours so we could not only get hair and make up inspiration but get to try on some of their beautiful vintage clothes, as you can see in the photos below.  Thank you so much to Carli Norris and her team at Chocodolly. 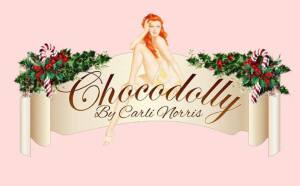 Colchester Operatic Society present this energetic and fun show that will have your feet tapping, and your heart singing.

With music by Marc Shaiman, lyrics by Scott Wittman and Marc Shaiman based on the 1988 John Waters film Hairspray.

In 1960s Baltimore, dance-loving teen Tracy Turnblad, a big girl with big hair and an even bigger heart, auditions for a spot on Local  Television’s “Corny Collins Show” and wins. She becomes an overnight celebrity, a trendsetter in dance, fun and fashion!  Tracy uses her new found fame and status as a teen sensation to fight for equality and bring racial integration to the show.  Will she succeed and finally get the boy of her dreams?

This production of Hairspray is directed by David Rutter, a member of Colchester Operatic Society who has performed and directed shows both with COS and his own theatre company locally.  He is joined by Geoff Osborne as musical director, a well know music teacher and musical director across the region, and Debbie Marks as choreographer, an experienced dancer who runs her own theatre academy.

This show never stops and you are sure to be entertained by the fabulous cast of this award winning amateur dramatic society.

At The Mercury Theatre, Colchester

Evening performances start at 7.30pm, with Saturday Matinees at 2.30pm

(No performances on Sunday 28th)

Ticket prices range between £15 and £21.25 and are available from the theatre….

“It may be a little shop but once again CO2 are big on talent!” 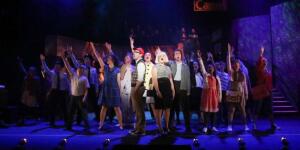 From start to finish I loved this show. It had everything good about it and left the audience amazed at the content pace and sheer enjoyment from 40 young people all singing and acting their sock’s off  on the Mercury stage.  The enthusiasm shone through from each and every one.

Starting with Will Mugford as Seymour  who raised his character from a meek florist’s assistant to the confident guy able to pursue his love for Audrey.  It was a perfect part for Will and a great credit to add to the many other roles he has already played with the society and matched so well in the part of Audrey by Emily Lane, who had a sweet gentle character and sung so well. It was a well- played duo.

The OTT character of Orin the Dentist played by Lewis Tebbitt brought the house down. Lewis’ timing was terrific and he made this sadistic Dentist very real and quite scary, as well as being hugely amusing.  The audience really appreciated the fun he brought to this character.

Mushnik, Seymour’s boss, was great also, played by Alex Terry who for a young guy gave a good account of an older man.  The duet “Mushnik & Son” was so well played and timed. A hoot!!

The Ronnettes played by Jasmine Triadi, Kassia Wall, Lorna Perrin, Shalom Asemota, Sophie Knights and Sophie Ramsey all fitted so well together and their close knit harmonies all through the show were spot on. Terrific performances from you all! Well done!

Dominic Simpson as Audrey 11 the Voice in his first show with the company was an important character, and his diction was so clear and good, and matched with Adam Spector as Audrey 11, the Mover, what a terrific job Adam did in a very small space with the Monster that was the Plant.

The singing from the whole company all round was outstanding and the production just kept on giving from this talented young group.  Super costumes, set, lighting and sound all played such a big part in the success of this show.

This was Leanne’s first show as overall Director and Choreographer and I thought it was first class. Leanne has worked in so many different aspects with Colchester Operatic over many years and been such an asset in everything she has done, so I was thrilled to see her at the helm and with a super team working alongside her made it one of the best CO2 shows I have ever seen.

Emma Nash as Musical Director and also lead keyboard really got the most out of all the cast in their singing, and the blend of harmonies was top class. Working with a talented band the sounds were really up there in tempo’s, sound, and blend.  As Craig Revell- Horwood would say A-MAZ-ING.

So to sum up I think you get the message I really loved this production.  Thank you to Front of House and everyone for their hospitality which I always receive and appreciate.  Don McKay Noda Councillor for the East Area attended the show with me, along with my assistant Hazel Hole. Both asked me to thank you for an excellent evening’s entertainment. Worthy of all the praise I hope you received from delighted audiences.